After we returned from the oyster hunt with bucketloads (literally) of oysters, we were ready for the second part of the Oestour:  The oyster feast.

First we were welcomed into the lovely sunny garden of the same cafe we had started that morning, and were given a well-deserved cold drink after our hard work. Once we were all settled, Marcel started explaining to us how we should open an oyster without injuring ourselves. A very vital part of the oyster hunting process in my opinion, because if you do not know what you are doing and just randomly start poking a sharp knife into an oyster, there is a high chance you will be heading straight to the nearest emergency room. However if you follow the following precautionary measures and take some time to practice, you should be fine. This is how it should be done:

Step 1:  Put on a glove and take a folded dishtowel into the same hand. The dishtowel provides some extra protection and also helps to secure a firm grip on the oyster.

Step 3:  For the actual opening of the oyster you can choose between two methods:

Side-entry method: Insert your oyster-knife in the upper right hand corner of the oyster, at 2 o’clock (8 o’clock if you are a lefty), at the point were the two halves of the shells meet. This is were you can find the adductor muscle of the oyster (the muscle responsible for opening and closing the oyster). Once you have inserted your knife at this point, gently push it further into the oyster and start sliding the knife back and forth until the top shell gives a little. Keep the blade of knife pressed against the upper shell while you do this, to avoid cutting into the oyster meat. Once the oyster is cut loose you can twist your knife sideways to open the shell completely.

Hinge-entry method: Insert the knife into the point were the two shells join together (the hinge) then gently wiggle it in until you feel that you are inside the oyster. Then open the oyster by sliding the knife to the ‘ 2 o’clock point ‘ and cut the adductor muscle loose. Make sure you keep the knife pressed against the upper shell so that you do not cut into the oyster meat while you do this. Once the top shell gives a little, twist your knife sideways and open the oyster.

Step 4: Once you have chucked away the top shell, you can cut the bottom part of the adductor muscle which attaches the oyster to the bottom of its shell. Once the oyster is loose, you are good to go!

How to open an oyster properly?

Besides the two above mentioned methods we also learned that there is an alternative method which I would like to call the ‘lazy method’: Also known as the barbecue!

If the oysters are too big to open without cracking the shell in half, or they are just stubborn and refuse to open for no particular reason, you can still eat them if you place them on the barbecue for 3-5 minutes (depending on their size). With this method the oysters will cook in their own fluid and open themselves when they are done. Besides the fact that this method requires no knife-effort and is therefore by far the safest option, it is also very delicious.
Apart from the closed oysters, we also prepared some opened oysters on the barbecue. 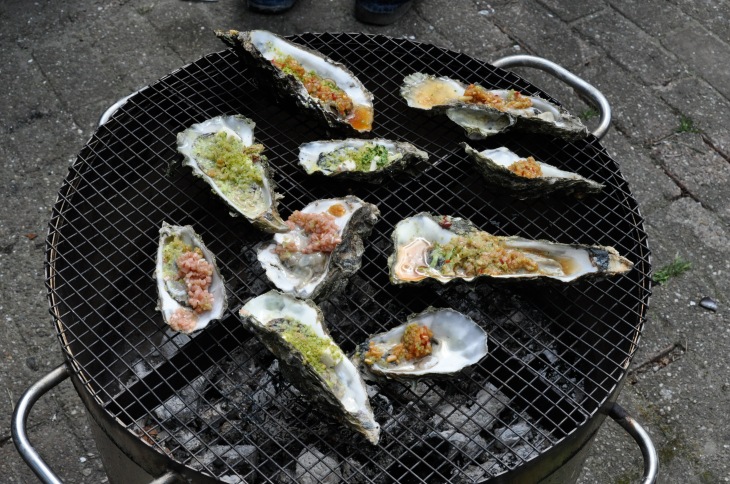 The people from the Oestour also prepared a couple delicious salads, different sorts of bread and a variety of toppings/dressings so that we could try different flavor combinations. This was great, because no matter how much you like raw oysters, after eating 5- 10 oysters your taste buds are ready for something else.
We could choose between a delicious herbed breadcrumb-topping, garlic butter and a classic French shallot and a red-wine vinegar dressing (called mignonette in French). They had also made a dressing with soy sauce, a combination I had never tried before, but which was surprisingly tasty. Some people put the soy sauce dressing on their barbecued oyster but I personally liked it more on a raw oyster. Below you can find the recipe:

About two hours into the feast, after we had eaten more oysters than we could possibly count, had more than a few glasses of wine and beer and we were all perfectly happy sitting in the sun, something really special happened.
Just when we thought the day could not get any better, Alex (my boyfriend) found a pearl!
Because I had organised the day (and I can vaguely remember letting out a scream for him to give it to me, oops) he gave the pearl to me! The perfect ending to the perfect day! 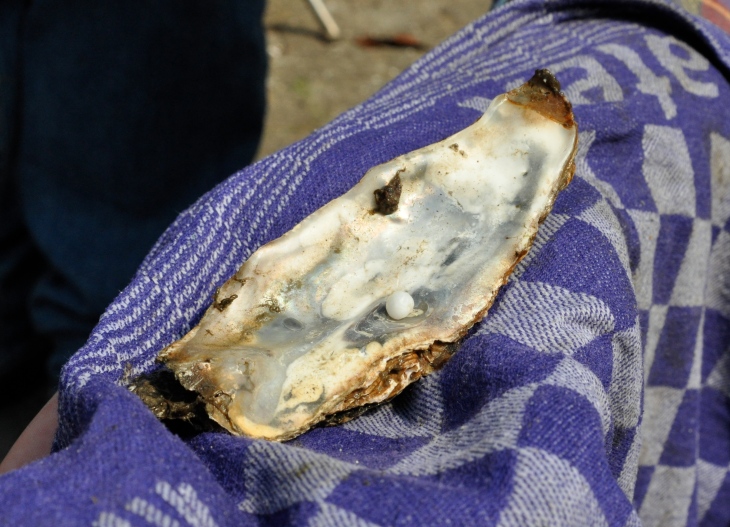 After some research I found out that is very rare for a pearl to be found in a wild oyster. It is estimated that only 1 in 35.000 wild oysters contains a pearl. An oyster makes a pearl when a little piece of dirt (sand grain, seaweed, wood particle) gets stuck inside the oyster while it is sucking in water to filter out the plankton that it lives on. Sometimes the oyster is unable to get rid of this little pice of dirt and because this irritates the oyster it begins to form layers of the inner shell (mother of pearl) around the dirt to make it smoother. Apparently it takes about 200 layers to make a pearl with a 1 mm width! It must have taken many years to grow into the size of the pearl we found, which makes it such a special and lucky find! My plan is to make it into a hanger for a necklace, when its done I promise I will post a picture.

I can imagine that some of you would also like to go on the Oestour.
Your first chance to hunt for your own oysters and to find a pearl (not guaranteed) will be in September of this year.
Please visit the website if you want to order your tickets for next season:  http://oestour.marcelschouwenaar.nl/

When I suggested to go on an oyster excursion, my oyster-loving friends met the idea with both enthusiasm and curiosity. Through the years we had all become very experienced in ordering and eating oysters, but as we would soon find out, none of us ‘city-slickers’ knew exactly how they made it from the water to our plates, let alone what this process was called. Does one pick oysters, harvest them, dig them out?  No one knew for sure, but it did not take us long to agree that we liked the thought of going hunting for oysters the most.

On a very early and sunny sunday morning in April, 14 people and a dog, left Amsterdam to go on our first-ever Oyster hunt!

A good two hours later we arrived at cafe ‘Het loze vissertje’ in Wilhelminadorp, on a bay of the Oosterschelde (Zeeland). Here we were greeted by Marcel Schouwenaar who is the mastermind behind the Oestour and we were kindly offered a coffee and a Zeeuwse Bolus (a sweet, sugar and cinnamon, pastry typical for this part of the Netherlands) so that we would not have to eat our first oyster on an empty stomach.

Because the tide does not wait, not even for oyster-hunters, the time soon came to head out towards the water.
Armed with buckets, chisels, screwdrivers, wellingtons and gloves, we climbed up the dyke, where Marcel started the tour by giving us a short oyster-introduction. When he had shared his knowledge about the history of the wild oyster and provided us with some practical tips about which oysters to look for, we were all very eager to head out to the oyster-beds and begin the hunt.

Crash course into the wonderful world of the wild oyster

We were told to search for relatively small oysters, the size that would fit into a big hand palm. Farmed oysters are usually quite small because they are harvested for consumption after a 2-4 years. These wild oysters on the other hand can become very old (15-20 years) which results in gargantuan oysters. Because wild oysters have more time to grow, they can become as long as 25 cm! Besides the fact that these big oysters have too much meat in them to swallow in one go, they are also very hard to open without breaking the shell.

Wild oysters do not grow in neat little rows, but rather in giant clumps on top of each other. Because these oysters have razor-sharp edges, Marcel advised us to look for loose oysters and leave the big clumps alone. The reason for this is that, even with big gloves on, you could seriously injure yourself by attempting to separate one single oyster from its clump of sibblings. 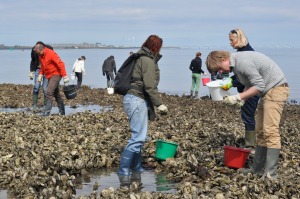 Oysters in a bucket

The foreign Japanese oyster (also known as the Creuse) was introduced to the Netherlands after an outbreak of the ‘oyster-disease’, killed most native Dutch oysters in the 1960s. This oyster species proved to be very resilient and has flourished ever since its introduction up to the point that ecologists now even speak of an ‘oyster-plague’. Good for us! Because of the abundance of oysters in the Dutch waters, the government wants to promote their consumption and has ruled that every person is allowed to bring home up to 10 kg of wild oysters a day!

The Dutch oyster-season usually starts in September and goes on until April (all the months with the R in their names). During the other months, oysters can still be eaten, but because they spawn (process where they release eggs and sperm into the water to produce offspring) during this time, they become soft, watery and less meaty. All in all enough reason to leave them alone for a couple of months if you ask me.

When after an hour or so, everyone had their buckets filled up to the rim with oysters, we were ready for the next step. Because oysters grow in the mud we had to give them a good rinse until the water became clear instead of murky.

Besides oysters we also found a lot of other sea creatures, like mussels, starfish (seastars), regular crabs and even a few hermit crabs. The crabs we found were unfortunately way too small to eat, so we put them back so that they would get the chance to grow a little bigger.

When we were all done rinsing our oysters and had worked up an appetite, Marcel invited us all back to the cafe we met earlier that morning for the second part of the excursion: The oyster feast!

If you want to know how to open an oyster and learn about different ways to eat them, please make sure to revisit my blog!

The oyster hunt (part two) will soon be posted… 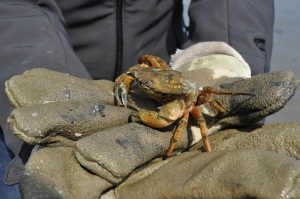 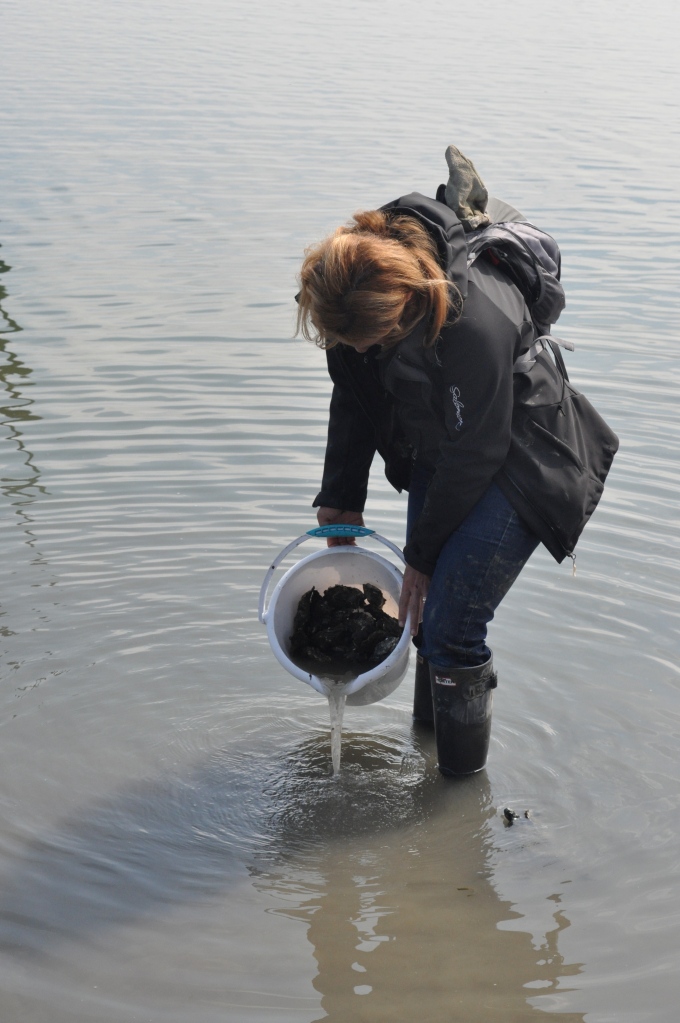 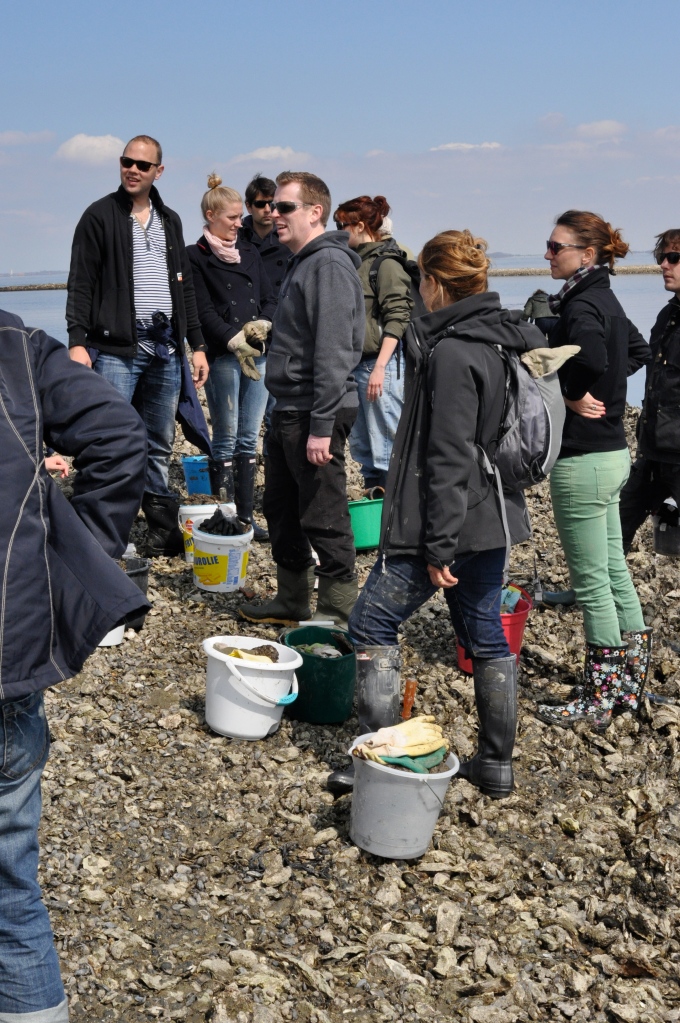 Happy hunters: Full buckets for everyone